FUNCTIONS OF THE SKIN

The skin is the largest organ of the body and is vital to an animal's survival.
Skin performs many functions, including:

LAYERS OF THE SKIN

The skin is composed of distinct layers: epidermis, dermis and hypodermis (subcutaneous tissue).

The epidermis consists of multiple layers called strata. It varies in thickness depending on its location on the body.

The dermis, or the middle layer of the skin, provides strength and elasticity. It is composed of collagen fibers, sweat glands, sebaceous glands, arrector pili muscles, hair follicles, and ground substance. Ground substance is composed of glycosaminoglycans and proteoglycans that function in water storage, homeostasis and support of other structures. Several types of cells are found in the dermis; fibroblasts, immature cells that help form collagen; mast cells, which release histamine, heparin and other inflammatory mediators in response to injury or allergic stimulation; histiocytes which can phagocytize (engulf) bacteria, and dermal dendrocytes which are antigen-processing cells.

The hypodermis (subcutaneous layer) is the deepest layer of the skin. It is primarily composed of adipose (fat) tissue, which functions as insulation, padding, and a storage place for reserve energy. The hypodermis also contains blood and lymph vessels and nerves.

The skin is composed of distinct layers: epidermis, dermis and hypodermis (subcutaneous tissue).

PROTECTIVE CHARACTERISTICS OF THE SKIN

The skin protects the body by 3 mechanisms. 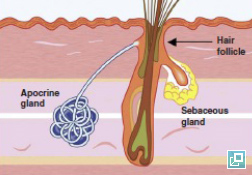 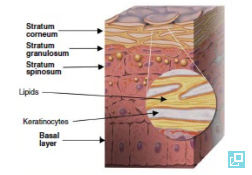 Layers of the skin

The epidermis is composed of 4-5 layers, with the stratum corneum being the outer layer. Keratinocytes constitute 85-90% of the epidermal cells and synthesize keratin (an insoluble protein and the chief constituent of skin, hair, and nails). Keratinocytes are called basal cells, prickle cells, granular cells, clear cells and cornified cells during various stages of their development. Other cells found within the epidermis include melanocytes (~5%), Langerhans cells (~5%) and Merkel cells (~2%).

From inner to outer, these are the 5 layers of the epidermis:

This layer contains daughter keratinocytes from the basal layer, and Langerhans cells, which are antigen-presenting cells that function in immune surveillance. Keratinocytes in the stratum spinosum synthesize lipids that will be extruded into intercellular spaces when the cells reach the stratum granulosum.

This layer is formed by flattened nucleated keratinocytes which synthesize filaggrin and keratin filaments.

This compact layer, formed by nonnucleated dead keratinocytes, is found only in the footpads of dogs and cats and is not shown in the diagram.

Epidermal lipids have important roles in the function of the skin. Lipids are involved in barrier function, the cohesion and desquamation of corneocytes, and in the regulation of epidermal proliferation and differentiation. Skin surface lipids of dogs are composed of cholesterol, cholesterol esters, diester waxes, free fatty acids and ceramides. The ceramides are particularly important in barrier function.

The skin is a major sensory organ. Thermoreceptors include cold and warm units.Mechanoreceptors are stimulated by touch, pressure, vibration or hair movement. Nociceptors respond to irritants and are also involved with hyperalgesia and pruritus. Pruritus, or itching, is an unpleasant sensation that provokes the desire to scratch. It is the most common symptom in veterinary dermatology. Pruritogenic mediators include acetylcholine, calcitonin gene-related peptide, corticotropin-releasing hormone, endocannabinoids, endothelins, endovanilloids, histamine, interleukin (IL)-2, IL-31, kallikreins, proteases, kinins, leukotrienes, neurokin A, nerve growth factor, thromboxane A2, tryptase, vasoactive intestinal peptide and others. Central factors such as anxiety or boredom, and competing cutaneous sensations including pain, touch, heat or cold can magnify or reduce the sensation of pruritus.

FUNGAL CULTURE & IDENTIFICATION
Watch a demonstration of a toothbrush culture.

Skin Biopsy
Determine when this procedure is needed and how to perform it within the clinic.